Moroccan Kasbahï¿½??s of the Great South, Your Morocco Tour Guide 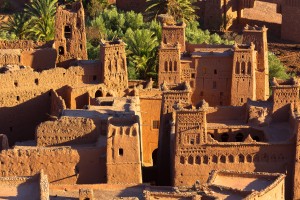 The Moroccan Kasbah was a place for the local Caid or Pacha to live in and a place of defense when a city was under attack not unlike the medieval European keep. Sometimes, they were built on hilltops so that they could be more easily defended such as the famous Ait Benhaddou near Ouarzazate. It is no accident that many great films like Lawrence of Arabia and Gladiator were filmed here because it retains the character and atmosphere of centuries ago when it was an important post on the camel caravan route from Africa to Morocco. Ait Benhaddou Kasbah was a busy teeming Ksar (a fortified town) with fortified towers and reinforced walls. Inside the Ksar, there was a central mosque surrounded by family homes, communal areas and small palaces. In its earlier history, Ait Benhaddou is believed to have housed thousands of inhabitants. It was composed of six Kasbahs and nearly fifty houses, made with red pisé and connected through a complex maze of narrow streets. Visitors can step straight into the medieval past and it is a great place to take the family to explore. 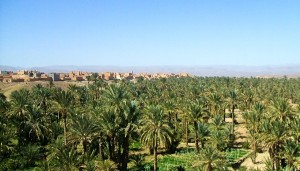 Morocco’s Southern region and in particular the region of Skoura is referred to the “Valley of one-thousand Kasbahs,” referring to the way-stations of ancient caravan routes traveled by tradesmen and adventurers. They brought with them customs and crafts, beliefs and skills, and they sought shelter and social interaction within secure Kasbah walls. Skoura has superb Kasbahs on its doorstep, including the ruins of the Kasbah Amerhidil, and it is an excellent base from which to explore the Dades Valley, the Todra Gorge and the Valley of the Roses. The Glaoui Kasbahs at Telouet and Taourit are also historic sites to visit on a Morocco Tour. Telouet, the seat of Thami El Glaoui Pacha of Marrakech under the French is an imposing ruin with a central living area which is relatively well preserved with the Glaoui’s living quarters bedecked in flowered zellij tiles looking out on to the village of Telouet. Kasbahs were also fortified mansions built by the rich and powerful caids and local feudal leaders. Kasbah Taourit is another imposing Glaoui Kasbah in Ouarzazate the capital of the South. The Krupp cannon which founded the fortunes of the Glaoui’s which enabled them to dominate rival tribes still lies outside Kasbah Taourit. 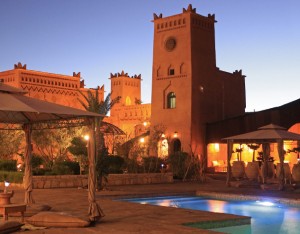 Throughout the centuries Morocco’s strong and enduring Kasbahs have kept silent vigil guarding communities from potential attack which was all too common in the feudal era which lasted right up to the 1950’s chronicled in Gavin Maxwell’s epic account “Lords of the Atlas.” Some of Morocco’s finest boutique riads and hotels are now converted Kasbahs. Built or rebuilt in traditional style, they have been renovated to accommodate tourists in luxury and style. A few of the best examples are found in Ouarzazate and Skoura region. In the Ait Benhaddou Region, Riad Ksar Ighnda is a restored Kasbah with modern architecture that offers a luxury experience and stay inclusive of a private pool, roof top dining, a Hammam and is away from the city center. In Skoura there are boutique riad guests houses, Les Jardins Des Skoura and Kasbah Ait Ben Damiette, converted Kasbahs that are French owned and offer up luxurious stays surrounded by gardens.

Both are located in the heart of the Skoura palmeraie. More Kasbah’s are being renovated and turned into boutique hotels and guesthouses to offer Moroccan travelers an exciting authentic experience. The most well known Kasbah Hotel in Skoura is Dar Ahlam, “Dream House” which is an an opulent boutique hotel in the heart of the Skoura palmeraie. Built around a labyrinthine converted Kasbah from the early 20th century, this luxurious property consists of nine suites and three private villas in the attractive gardens with a large swimming pool. Richard Branson’s Kasbah Tamadot is another well-known luxury Kasbah Hotel located in the foothills of the High Atlas Mountains.

This property offers fantastic service, a beautiful spa, restaurant, and a stunning mountain backdrop. Kasbah Bab Ourika in the Ourika Valley offers outstanding views of the High Atlas and is a great value place to stay with friendly staff and fantastic food made from produce from their own garden. At Imlil at the foot of Jebel Toubkal with breathtaking terrace views of the peaks and valleys, Kasbah Du Toubkal is the perfect base for exploring the Atlas Mountains and experiencing Berber culture. Today, as as Morocco traveler, the ancient Kasbahs of the Great South can be discovered through historic visits on a private tour and visitors also have the opportunity to stay in one.