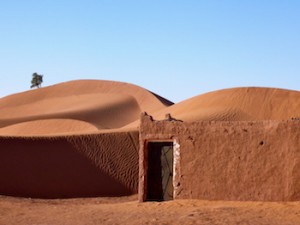 Although, compared to neighbouring Algeria, Morocco has only a fraction of the Great Sahara Desert within its territory, yet Morocco offers the safest and best-organized access to the Sahara of the whole of North Africa. Whether you want a quick glimpse of the magnificent dunes on camelback, the thrill of sand boarding down the dunes, an overnight experience under the vast starry skies in a nomad's tent, or a longer excursion to explore the expanse of the dune complex and the people who inhabit it, Morocco has it all. There is nowhere else where you could be in some of Africa's highest snow-tipped mountain ranges and in the depth of the sandy expanses of the desert in the same day. And your trip to Morocco’s Great Deserts will take you through centuries-old oases on route. Along the way, you will meet local nomads and villagers whose families have worked this land and survived its hardships for generations. Morocco lies on the northwesterly tip of the African continent with a long Atlantic coast. This coast runs approximately southwest to northeast. Almost parallel to the coast, behind the fertile plains of Morocco's principal rivers, are the Atlas Mountain ranges (from north to south, the Middle, High and Anti-Atlas). The Sahara desert begins in the foothills of these mountains on their eastern (interior) side. Sandwiched between the mountains and the Algerian border are the principle dune regions of Morocco. Further south, the Sahara meets the ocean where Sahara cities Laayoune and Ad Dakhla are known for their sandy dunes, unique flora, bird life and beaches. 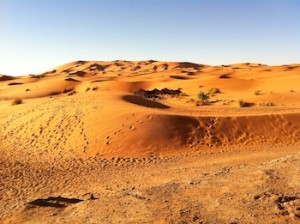 Starting in the north, the most frequently visited dune network is at Erg Chebbi, near the towns of Rissani and Merzouga. Erg Chebbi's dunes are the largest in Morocco, with some reaching around 150m in height. They cover an area of 50km (31 miles) from north to south and are about 5-10 km (3-6 miles) across. This area is easily accessible from Fes (via the Middle Atlas). A longer drive from Marrakech, takes visitors via the spectacular Tiz n'Tichka pass and the city of Ouarzazate or the stunning Dades Valley. This accessibility and the size of the dunes have meant that the infrastructure around the dunes at Erg Chebbi is very well developed, both in terms of desert bivouacs, luxury desert camps and guesthouses and hotels. This is great for those visitors who want a convenient way to see the desert on a tight itinerary, but those with more time or who seek to explore the Sahara in greater depth may prefer a more remote destination. Further south, and also reached via Ouarzazate (but this time via the beautiful Drâa Valley and its date palm oases and ancient defensive kasbahs) are the desert areas around Zagora and M'Hamid. At Zagora, you can see the famous sign indicating "TOMBOUCTOU 52 JOURS," ("52 days to Timbuktu"), which gives an indication of the importance of the desert and this region in particular for the camel caravans and trade routes of the past. Today, Zagora is a popular starting point for trips on camelback into the Sahara. The landscape here is flatter, although there are dunes at Tinfo, and near the town agriculture is relatively well developed, giving a different desert experience. Erg L'Houdi (meaning the Dunes of the Jews) and Erg Ezahaar (the Screaming Dunes) are respectively one or four days' camel ride from M'Hamid, which is itself around 100km (60 miles) further along the Drâa Valley towards the Algerian border. The paved road ends here. M'Hamid feels much more like a nomadic outpost. Being much more remote, this area is considerably less visited and many of the local sites of interest, such as sacred springs, ancient zaouias (sites of religious pilgrimage in honour of saints) and local Berber and nomadic villages are more easily (and comfortably) accessed in a 4x4 vehicle with an experienced guide. Being such an important region for trade and artisans, the area between Zagora and M'Hamid features some interesting historical and cultural sites, such as the village of Amezrou - base of former Jewish silversmiths with an Ancient Jewish Mellah - and Tamagroute, with its pottery cooperative, zaouia and Koranic Library. 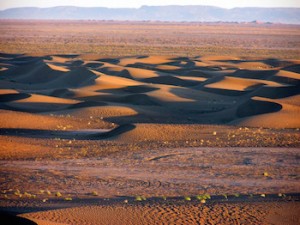 The last of the four main dune networks is Erg Chegaga, between M'Hamid, 50km (30 miles) west of the town towards the settlement of Foum Zguid. After Erg Chebbi, these are the second most popular dune destination. Erg Chegaga has the highest dunes in this southerly area, but they are still considerably lower than the dunes at Erg Chebbi to the north. A favourite activity is to scramble to the top of the dunes in time for sunrise over the Sahara. Running uphill on sand is not an easy task, so this is an activity for early risers only! Many visitors to Morocco manage to fit in an overnight stay under canvas or in a Kasbah-style hotel at one of the main dunes areas of Erg Chebbi or Erg Chegaga. However, for the more adventurous or those wishing really to escape the distractions of the modern world, the trip down to south to Morocco’s Great Deserts and also to M'Hamid and beyond is certainly worthwhile. For those with less time, however, the larger dunes still offer the chance to get away from it all. And while a journey on camelback is certainly not the most luxurious in terms of comfort, it is unlike anything else! Climb aboard the "ship of the desert" and image the great trains of camels, which once crossed this magnificent sandy expanse, transporting gold, silver, and salt across the African continent! Written by Lynn Sheppard  Lynn Sheppard has lived in Essaouira, on Morocco’s Atlantic Coast for more than 2 years, supporting local non-profits, writing and becoming an expert on all things Swiri (ie. Essaouiran). She blogs at Maroc-phile.com and for other travel industry clients.