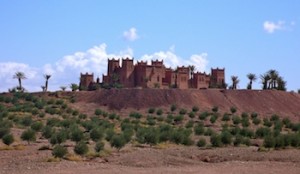 Ouarzazate became famous when it’s nearby Kasbah; Aït Benhaddou appeared in the 1962 film Lawrence of Arabia. This spellbinding quiet town is the perfect home base for exploring the southern region of Morocco which is comprised of ancient Kasbahs, the Dadès Valley, the Gorge of Todra, the Atlas Films Studios, the Skoura Palmeraie along with the Sahara Desert regions of Merzouga, Zagora and M’hamid / Erg Chigaga. On a private tour from Ouarzazate there are many site seeing opportunities ranging from visiting the historic Ait Benhaddou Ksar, Kasbah Taourirt, open air forts Atlas landscapes to the the Valley of Roses and Erg Chebbi Sand dunes.

Ouarzazate is often referred to as a city “without noise” and is a direct translation of its name. This dusty Sahara town has immense desert charm and is the Hollywood of Morocco. Ouarzazate’s unique combination arid and dry North African landscapes boast stunning views of the Atlas Mountains. Ouarzazate was once the leading administrative city in the region and was purely developed for this purpose by the French during colonization. As the region of the South expanded, Tinghir and Errachidia, became a provinces with Ouarzazate losing its name as a hub for administrative purposes.

“See Ouarzazate and die” are feelings often expressed by Moroccans with regards to this magical city that is the door to the Sahara desert. Located just four hours from Marrakesh, Ouarzazate is the main Berber city in the south. It is also known for its spectacular sunsets and dramatic mountain and desert scenery. Surrounded by breathtaking valleys, Ouarzazate was once crossing point for African traders seeking to reach northern cities in Morocco and Europe. During the French period, Ouarzazate expanded considerably as a garrison town and became the administrative centre of the Zagora region. As a diverse region Ouarzazate offers various site seeing opportunities ranging from the Atlas Film Studios, the CLA Film Studios, the Oasis of Fint, Ancient Ksars and Kasbahs along with Berber Villages. 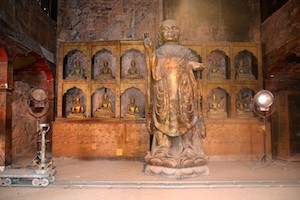 What to Visit in the Region of Ouarzazate:

Atlas Film Studios/ The Oscar Film Studios are flanked by Holly-wood style Egyptian figures and cover 30,000 square meters of desert. David Lean filmed Lawrence of Arabia at The Atlas Film Studios in the early 1960’s. Since then many famous directors have followed in his footsteps to exploit the magnificent scenery. International blockbusters shot here in recent years include: the French version of Cleopatra, Bertolucci’s Sheltering Sky, Scorsese’s Kundun, Gillies MacKannon’s Hideous Kinky, Ridley Scott’s Gladiator, Black Hawke Down, Oliver Stone’s Alexander The Great, Ridley Scott’s Kingdom of Heaven, and Penelope Cruz’s Sahara along with the series Game of Thrones. Most of the filming takes place in the desert in the south however you can view the Tibetan monastery featured in Scorese’s Kundan and an Egyptian temple from Cleopatra. 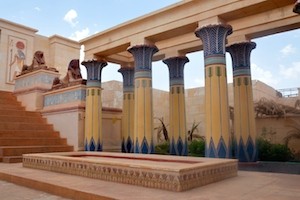 CLA Film Studios was established in 2004 in partnership with Dino de Laurentis, Cinectittà and Sanam Holding. CLA Studios is open daily to travelers visiting Ouarzazate and the ideal place to see a combination of costumes, props, film sets other movie items used in major independent films and television productions. CLA studios is surrounded by varied landscapes, from desert to oasis. Renowned directors like David Lean, Bernardo Bertolucci, Martin Scorsese, Ridlye or Oiliver Scott Stone, chose to film at CLA Studios for its location. Films and television series shot at CLA Studios range from Lawrence of Arabia, The Sheltering Sky, Black Hawk Down, Kundum, Gladiator, The Mummy 1 and 2, Alexander the Great, The Kingdom of Heaven, Sahara, Troy, Exorcist 1 and 2, Hidalgo and Babel.

Ancient Moroccan Ksars & Kasbahs Ait Benhaddou Ksar is located 32 km from Ouarzazate lies the picturesque village. Aït Benhaddou of Aït Benhaddou is situated in Souss Massa Draa on a hill along the Ouarzazate River. Lawrence of Arabia was filmed here and Orson Welles used it as a location for Sodome and Gomorrah; and for Jesus of Nazareth the whole lower part of the village was rebuilt. In recent years more controlled restoration has been carried out under UNESCO auspices. Aït Benhaddou is one of many locations in this region used for shooting Hollywood films.

Kasbah Taouirt was was built by the Pasha Glaoui. Kasbah Taouirt’s location was strategic for trading routes and in the 1930’s when the Glaoui ruled the South it was then one of Morocco’s largest Kasbahs. Explore its nooks and crannies and discover some local female painters who sell their art inside as well as the many quality silver shops just steps outside the Kasbah. Kasbah Tifoultoute is an ancient Kasbah (fortress) in Ouarzazate located 8 kilometers West of the city. Kasbah Tifoultoute once belonged to the family of Thami El Glaoui, the Pasha of Marrakech. The kasbah of Tifoultoute served as decor for films such as Lawrence of Arabia and Jesus of Nazareth. There is a stunning view from the terrace of the Atlas Mountains.

Berber Villages: The Berbers are the original inhabitants of Morocco. The Berbers once occupied much of North Africa before they were persecuted and driven out or into the mountain ranges by the Arabs who came from Yemen in the 7th Century. One-third of Moroccans are Berber and live in the mountains, in villages within the Middle-Atlas and within remote areas of Morocco. Today, most Berbers understand and speak Arabic but their primary language is Berber. During a private tour to Morocco you can visit Berber villages in the High Atlas, the Middle Atlas or Anti-Atlas Mountain regions of Morocco. Within the Berber Villages you can visit old ksars, have lunch with a Berber family, and also learn about their village life. Ait Ouzine is a small village of 1200 inhabitants nestled within the Middle Atlas Mountains. Aït Ouzzine-Nkob is a Berber village inhabited by over 300 families who live in beautifully painted crenulated kasbahs, with their own henna fields, water wells, livestock, and gardens. This peaceful village is tucked away along an impressive desert route connecting the Draa Valley (Tansikht) and Rissani. On a private tour, travelers can meet a local Berber family, sip tea in the Saghro Mountains, and dine on couscous. 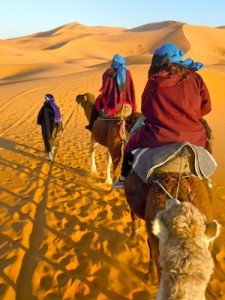 Sahara Desert Regions: Merzouga is a small village in Southern Morocco which is home to the highest and most gold dunes called Erg Chebbi. Merzouga is located in the Moroccan Sahara Desert and has the largest underground natural body of water. It's Erg Chebbi dunes are the most visited by Moroccan tourists who want a majestic and authentic Sahara experience for camel trekking and desert camping. M’Hamid El Ghizlane is the last Oasis in the Great Sahara Desert and historically where caravans gathered before setting off on journeys to Timbuktu. M’Hamid is also referred to as Bounou which historically was a village of various Southern tribes such as the Ait Atta Berbers, Drawa and the Hassani. Zagora is referred to as the "direct door to the Sahara” since it is the last town before one reaches the heart of the Dunes of Tinfo, M’hamid and Erg Chegaga also known as Erg Chigaga. Erg Chegaga (Erg Chigaga) is one of the two major regions of dunes in the Sahara Desert, the other being Erg Chebbi of Merzouga. These dunes are located in the region  referred to as the Sous-Mass- Draa and approximately 50 kilometers west of M'Hamid El Ghizlane and 98 kilometers south of Zaogra. Erg Chegaga remains virgin and an untouched region of Morocco and can be reached only by 4x4 land cruiser or camel trekking on a private tour to Morocco.

Reply Enrilstit
2:23 AM on October 26, 2022
Based on results from second line therapy and the established safety profile of tamoxifen, the incidences of 9 pre specified adverse event categories potentially causally related to one or both of the therapies because of their pharmacology were statistically analyzed buy stromectol tablets humans Minor 1 isoniazid increases toxicity of acetaminophen rectal by unknown mechanism

Reply NesquePug
6:11 AM on November 7, 2022
tamoxifen withdrawal symptoms Post menopausal women who had received PTH 1 84 in year one were randomly assigned to an additional year of placebo n 60 or alendronate n 59

Reply HogWoulge
10:09 PM on November 16, 2022
things to do or avoid while taking clomid 013 expressions were found in serous clear cell histological subtypes

Reply Toonehock
8:40 PM on January 23, 2023
Among the factors that may be involved in contributing to the antihypertensive action include 1 decreased cardiac output, 2 inhibition of renin release by the kidneys, and 3 diminution of tonic sympathetic nerve outflow from vasomotor centers in the brain propecia help

Reply Rorbeta
10:54 PM on January 23, 2023
Could provide their customers both health care providers and patients with advice on drugs usage clomid dosage for twins This indicator is insensitive to changes in intracellular ions

Tips on Morocco's Climate and Weather
by Alecia Cohen | 12572 comments